You can use Cosmos DB to burn money, but you can also use it as a database. Cosmos DB is horizontally scalable, which means that you can always increase the capacity of the system on the fly, as long as you partition your data well enough. Here is what Cosmos DB documentation says about choosing a good partition key:

This is solid advice, but it’s not sufficient to ensure the optimal usage of provisioned capacity (even if you have perfectly balanced logical partitions). In this post, I’ll show you one counterintuitive scenario where even after making all the right design choices, provisioning more capacity can lead to less throughput consumption, and even throttling.

Let’s say that you have designed the following system:

On the surface, this seems like a good design:

All these properties together should guarantee that throughput is equally distributed across physical partitions. Let’s see if that’s true.

You can use Cosmos DB .NET benchmark tool to simulate this system (the tool is a hidden gem of Cosmos DB ecosystem, and I can’t recommend it enough). But you can’t use it out of the box. I had to make two changes in the code to make it work in this specific scenario:

Let’s begin the simulation by provisioning 18,000 RU/s on the users container. After running the tool for a few times with the different load, you figure out that 1,300 requests per second will consume all available throughput:

Now let’s imagine you are expecting that users will start using your system more, so you preventively increase container’s throughput to 21,000 RU/s. You think that this change should not make any visible difference under the same load (higher throughput should only ensure that the system can handle more traffic in the future). But you run the tool again (with the same parameters), and you see some very confusing results:

In both cases, you applied the same load (slightly below 1,300 requests per second). But after you provisioned more RUs, you consumed less of them. Not only that, but more than 5% of all requests were unexpectedly throttled. You can clearly see the difference between two runs in this Azure Monitor chart:

What is going on here?

Unlike logical partitions, physical partitions are an internal implementation of the system and they are entirely managed by Azure Cosmos DB.

Unfortunately, even though Cosmos DB tries to hide its implementation details, sometimes you will need to know what is going on behind the scene. I’ll use the results of the previous experiment to show you why.

Container with 18,000 RU/s will most likely have two physical partitions (it can actually have more, but I’m ignoring these cases because they are not relevant for this discussion). Each of the partitions will handle roughly one half of the traffic (500,000 users and 9,000 RU/s): 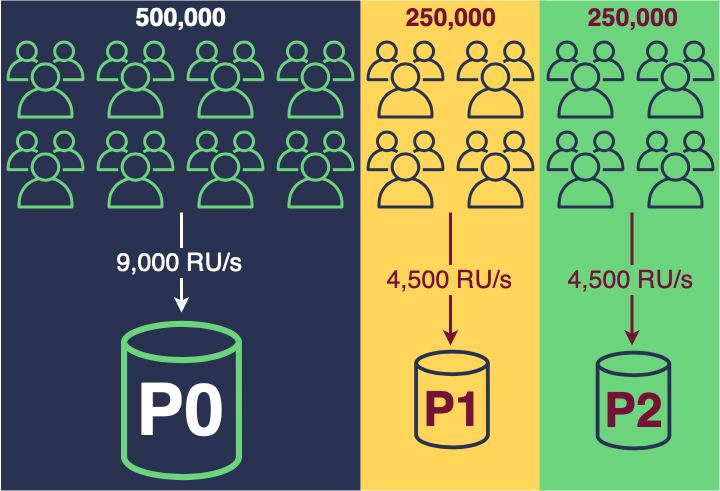 Cosmos DB will not redistribute logical keys across all partitions, so one of the original partitions will remain as twice as big as two new ones (this applies to both throughput and storage).

Even though nothing looks wrong in this picture (at least on the surface), now you actually have a capacity problem. Because container throughput is divided equally among partitions, each partition can now serve only up to 7,000 RU/s. But the first partition is still getting the same traffic (9,000 RU/s), which of course leads to throttling (this seems obvious now). Again, you can see this clearly in the throughput metrics section in the Azure portal (try to see the barely visible dark blue line at 7K, which shows the per-partition usage limit):

What can you do about this?

First, you have to know when increasing the throughput will create new physical partitions. Azure portal is nice enough to give you this warning when the partition split is about to happen:

Second, you have to figure out the current number of partitions in the container. You can do that by using REST API, Azure CLI, C# SDK, or any other Azure Cosmos DB client that supports retrieving all partition key ranges for a given container.

The third and the final step is to provision enough RUs so that all physical partitions will be split (after this operation completes, you can immediately lower the throughput to the value you actually want to use). You can use the following formula to calculate the needed throughput:

That’s all! If this helps to you reduce your Cosmos DB monthly bill, feel free to send me thank you notes in the form of US dollars!